Using Probe Mount 1AS and Alignment Fixture with Neuropixels 1.0 Probes

By clamping as far back from the probe shank as possible, the MPM Probe Mount 1As allows researchers to maximize the density of probes in multi-probe neural recording experiments.

By clamping the probe as far away from the shank as possible, rather than by the silicon spacer or dovetail cap, this probe holder allows researchers to maximize the density of probes in their multi-probe neural recording experiments.

The probe mount design was created in collaboration with the Allen Institute, supporting their development of the six-probe MindScope rig (see photo) and 24-probe next-gen insertion system. Both rigs use New Scale micro manipulators and multi-probe control software. 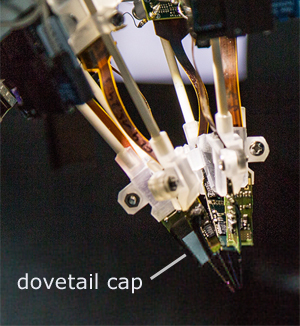 How to Install and Align Neuropixels 1.0 Probes in the MPM-Probe Mount-1AS

Due to manufacturing variations in the circuit boards of the Neuropixels probes, researchers often need to add shims between the circuit board and probe holder to achieve proper alignment. New Scale’s new probe Alignment Fixture has been demonstrated to be an excellent tool for alignment of both Neuropixels 1.0 and 2.0 probes in their respective probe mounts.

This article describes how to align a Neuropixels 1.0 probe in New Scale’s MPM-Probe Mount-1AS probe holder using the new Alignment Fixture. (For information on Neuropixels 2.0 probes refer to this related article.)

1. Remove the base of the probe holder

Use a screwdriver to loosen the two screws in the MPM-Probe Mount-1AS base. Remove the probe holder from the base.

2. Insert the probe holder in the Alignment Fixture

Use a screwdriver to loosen the screw in the probe holder. Open the probe clamp.

The probe clamp has a raised edge and a post to aid in probe installation.

5. Install the probe in the holder

Close the probe clamp and tighten the screw.

Contact us with questions or to order probe mounts

The Alignment Fixture and MPM-Probe Mount 1AS are designed for use with New Scale Technologies’ Multi-Probe Micromanipulator (MPM) system for precise, automated positioning of multiple silicon neural probes.

The compact design enables independent positioning of multiple probes in the smallest space, with ample clear area for a virtual task environment. Automatically and independently move each probe to the optimum location in the brain. 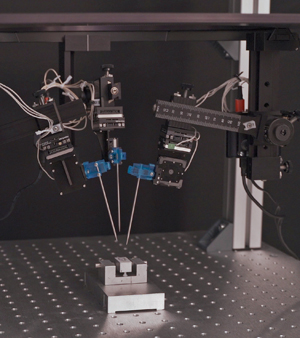