The Promise of High-Density Silicon Probes for Neural Research 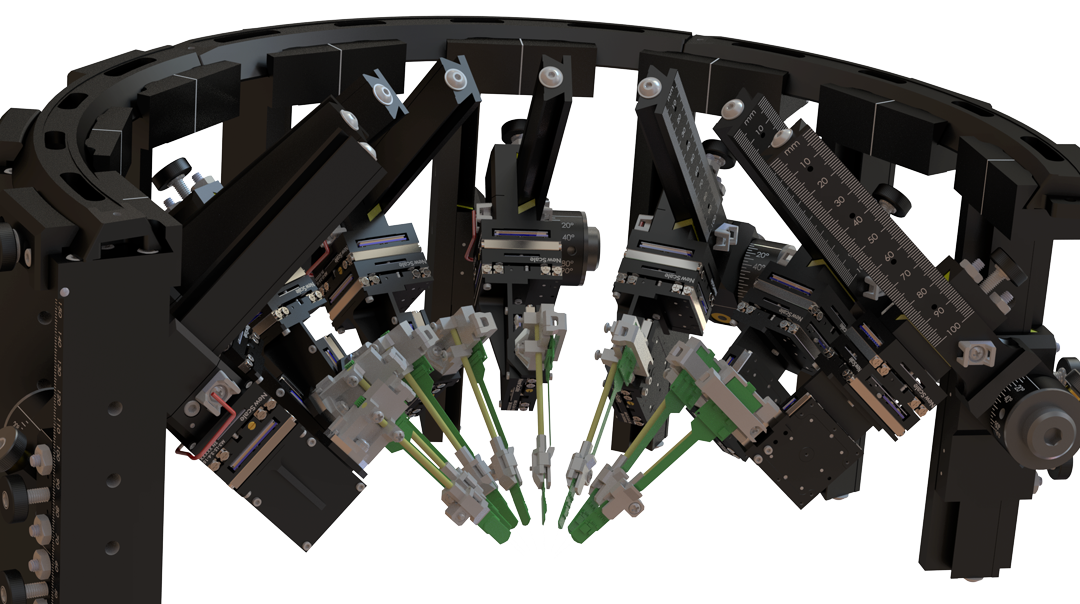 A recent article in Neuron outlines the road map to overcome the existing conceptual and technical challenges for obtaining a detailed understanding of the role of cortical layers in sensory computation and perception.

These challenges include the precise positioning of multiple high-density silicon probes, a challenge addressed by the Multi-Probe Micromanipulator System.

Harvard Medical School Neurobiologists David Hubel and Torsten Wiesel won the 1981 Nobel Prize for Physiology/Medicine for their work in the 1950s and 1960s recording electrical activity in the brains of cats. Their invention of the Tungsten Electrode in 1957 was the breakthrough discovery that allowed them to systematically create a map of the visual cortex through single cell recordings.

In their Neuron article, Cracking the Function of Layers in the Sensory Cortex, Hillel Adesnik and Alexander Naka begin with a quote:

At present we have no direct evidence on how the cortex transforms incoming visual information.
– Hubel and Wiesel, 1962

and then make this challenging assertion:

Despite more than half a century since the above statement was made, a detailed understanding of cortical transformations across the cortical layers remains remarkably incomplete.

The problem in trying to understand how the brain functions is the fact that the human cortex is a complex organism, made up of many layers, that receive input from the Thalamus and other organs and then transform and manipulate data from layer to layer.

In trying to understand, for example, how the brain processes a visual image, one needs to identify and measure neural activity simultaneously across at least 5 cortical layers, while taking into account cortical input and output structures. Trying to view this activity in real time is a complex and massive undertaking.

The Hubel/Wiesel invention of the Tungsten electrode, which could record single cell activity, was a great start. But it was unable to view layer to layer activity that is required for a full understanding of cortical function. The problem is the technical difficulty in recording enough neurons simultaneously in behaviorally relevant contexts.

In addition, understanding any neural circuit requires perturbing it and then measuring what changes take pace. Controlling the perturbation so unintended areas are not impacted, is another major challenge.

A comprehensive, encompassing visualization, in real time, is required to understand brain function. This is obviously a huge challenge, but the authors make the following promise:

… recent technological advances finally allow for the execution of the experiment that Hubel and Wiesel prescribed, as well as many other sophisticated assays that can overcome this conceptual challenge. The holistic approach that understanding the cortex calls for is no longer beyond reach. Several emerging technologies will soon make combining large-scale recording with extremely precise perturbations of neural activity experimentally possible. These technologies include:
–
Major advances in silicon probe technology providing extremely compact multi-electrode arrays with up to 1,000 contacts now permit simultaneous physiological access to dozens of brain areas, and just as importantly, densely within and across layers.
–
Clever mechanical systems for inserting multiple of these probes into the same head-fixed animal should allow tracking the activity across all layers of each area and across a series of connected areas in the cortical hierarchy simultaneously.
–
Adding micro-LEDs or optical waveguides directly onto these probes could provide optical control over their full extent so that investigators could optogenetically control specific layers and within specific cortical areas.
–
Large scale multiphoton imaging.

A new challenge created through use of these new technologies is how to process in real time, the massive amounts of data that are collected. Continued advances in data analysis, experimental design, modeling and theory are critical for harnessing and fully exploiting the new experimental techniques available for observing and perturbing cortical circuits.

With the advent of new technologies for large-scale recording and manipulation of neural activity across cortical layers, coupled with the possibility of identifying all of the cardinal cell types that compose each layer, we are on the threshold of obtaining the new data that could finally address how cortical layers differentially contribute to cortical computation. Mounting a holistic attack on cortical circuits with these new approaches, particularly in the appropriate behavioral paradigms, promises to provide fundamental new mechanistic insight to into cortical circuit structure and function.