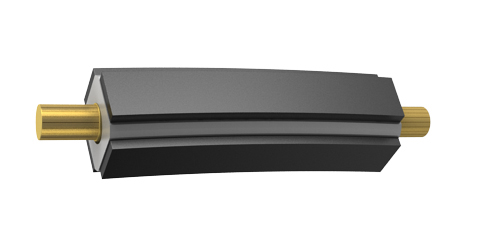 Developed for mobile devices, New Scale’s newly patented piezo vibe motor is 33% smaller than DC vibe motors and generates no magnetic interference with compasses or other sensors in the device.

Victor, NY — April 28, 2014  — New Scale Technologies today announced that it has received its thirteenth U.S. patent for miniature piezoelectric motion innovations. The company’s haptic actuator system, or piezoelectric vibration motor, is 33% smaller than comparable DC vibe motors. Unlike DC motors, this newly patented device produces no magnetic fields and will not interfere with nearby sensors such as magnetometers. Applications include generation of tactile “silent” alerts in mobile devices such as cell phones.

The New Scale piezo vibe motor measures approximately 2.8 x 2.8 x 6.5 mm and achieves speeds of 12,000 rpm, making it the fastest micro motor on the market. It integrates a rotational sensor and closed-loop speed control with a simple digital control interface to simplify system integration for OEM designers. Intended for use in mobile and hand-held devices, it meets demanding requirements for shock, dust, humidity and temperature.

“The lessons learned from this development project go well beyond this patent and are being used in virtually all of our new smart motion systems in 2014,” said David Henderson, CTO and co-CEO of New Scale Technologies. “Innovations include materials development to extend the life and performance of friction drive systems, and bearing innovations to minimize acoustic noise.”

The operating concept for the piezo vibe motor is similar to that of New Scale’s patented SQUIGGLE® micro motor, with multilayer piezoelectric ceramic plates creating ultrasonic vibrations to rotate a central core. Because the piezo vibe motor is optimized to produce high speeds rather than high push force and precision, the inventors were able to use only two ceramic plates rather than four and significantly reduce the motor’s cost and power use.

In the twelve years since its founding in 2002, New Scale has secured thirteen US patents and corresponding international patents for piezoelectric motors and smart all-in-one motion systems with unmatched miniaturization, micrometer-scale resolution and fully-integrated electronics. The company applies this technology to develop standard and custom smart motion systems for original equipment manufacturers in optical, medical, scientific, aerospace, defense, and other markets.