The submersible’s external mini-cams can be seen on the robotic arm near the lower end of the sub during a test dive.
National Geographic photo by Great Wight Productions Pty Ltd and Earthship Productions, Inc.

Victor, NY — September 4, 2013— New Scale Technologies’ tiny piezoelectric M3-F focus module enabled high-quality 3D image capture in miniature high-definition 3D cameras on board the DeepSea Challenger, a groundbreaking submersible piloted by explorer and filmmaker James Cameron on an 11,000-meter (6.8 mile) solo dive to the Challenger Deep at the bottom of the Mariana Trench, the deepest known spot on Earth. The expedition took place in March 2012 and was featured in the June 2013 issue of National Geographic Magazine. A documentary movie will be released this fall, with footage shot by the cameras.

The submersible’s tiny HD cameras were enclosed in titanium pressure housings and mounted on the outside of the submersible on a robot arm. Two cameras side-by-side enabled 3D image capture.

“We needed to integrate remote focus control into the external 3D cameras, and found the M3-F through a review of available technology worldwide,” explained Adam Gobi, technical project lead for cameras and imaging on the DeepSea Challenger and president of Go Beyond Consulting Inc. (gobi@gobeyond-rd.com). “Size was a major constraint, as the internal volume of the custom titanium housing had to be minimized, necessitating the design of a custom HD-SDI camera not much bigger than your thumb.”

The design team had already selected a high-resolution M12 lens and designed custom dome port optics, which both corrected for in-water refraction and, when mated with the titanium housing, protected the internal camera from ambient pressure topping 16,500 PSI.

“The M3-F was the final piece of the puzzle, providing a very compact solution for achieving remote focus control with the M12 lens,” Gobi said. “The size of the M3-F makes it a unique product, and after initial testing, we were pleased to discover that the device was very responsive, while maintaining high positional accuracy. It gave us the performance we needed for our 3D application, where left and right camera focus must be perfectly matched.”

“Remote focus was absolutely essential for the mini-cams: Once the titanium housings were sealed and pressure-tested, opening them to make focus adjustments would be impossible,” said Patrick Campbell, Chief Technology Officer of CAMERON | PACE Group (www.cameronpace.com), which supported equipment production for the project.

M3-F modules were also incorporated in two external 2D mini-cams; one with a wide-angle lens and one with a macro lens for imaging small animals up close. The modules were used inside the pilot’s sphere as well, in two tiny HD cameras that recorded the pilot to create a 3D “dive log” and provide context for the footage from the external cameras.

The success of the project leads to the potential for M3-F focus modules to be incorporated in 3D cameras for entertainment and other industries. “Some of the things that went into building the DeepSea Challenger cameras, which had to be so tiny, will probably be used in action cameras in the next Avatar films,” James Cameron said in an interview with Reuters. 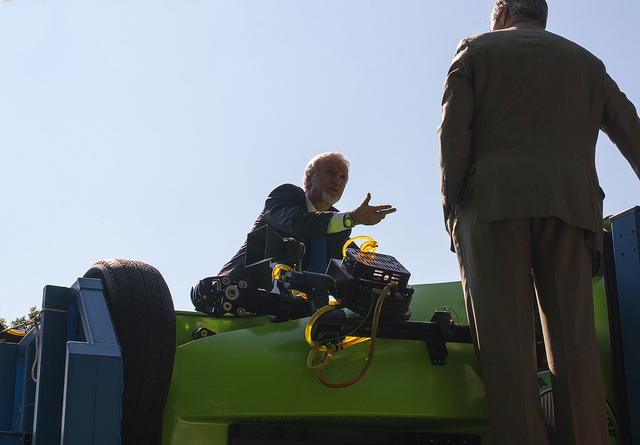 Explorer and filmmaker James Cameron in front of the camera on the robot arm on DeepSea Challenger at Capitol Hill in June 2013. Photo by Ocean Leadership.

The DeepSea Challengerwas transferred to Woods Hole Oceanographic Institution in March 2013, where scientists and engineers are working with Cameron | Pace Group to incorporate the sub’s numerous engineering advancements into future research platforms and deep-sea expeditions.

DeepSea Challenge is a joint scientific expedition by James Cameron, the National Geographic Society, and Rolex. Learn more at www.deepseachallenge.com.