Optogenetics and the Multi-Probe Micromanipulator

“Optogenetics has given researchers unprecedented access to the workings of the brain, allowing them not only to observe its precise neural circuitry in lab animals but to control behavior through the direct manipulation of specific cells. Karl Deisseroth, one of the rare neuroscientists who are also practicing psychiatrists, has made mental illness a major focus of his optogenetic research. Other scientists around the world are using the method to investigate some of the most stubborn riddles of neuroscience, including the fundamental question of how the physical brain—the nearly hundred billion neurons and their multitudinous connections—gives rise to the mind: thought, mood, behavior, emotion.”
– The New Yorker, “Lighting the Brain”

In optogenetics, genes for light-sensitive proteins are introduced into neurons or other specific types of cells in a mammalian brain. The cells’ activity can be monitored and controlled using light signals. Optogenetics has progressed rapidly from its beginnings in 2005, thanks in part to advances in supporting fields including photonics and micro-mechatronics.

Karl Deisseroth recently spoke with Neurophotonics about how the timely maturity of several photonics technologies, and their convergence with neuroscience, supported his pioneering work in the field of optogenetics.  Listen to the interview at spie.org (17:49)

Advances in micro-mechatronics technologies have driven growth in productivity for electrophysiology (neural recording), and by extension, optogenetics. To position multiple silicon probes precisely in the brain, the manipulator must have high precision, repeatability and stability.  It must also be compact enough to allow multiple manipulators to be located around an extremely small area – the size of a mouse’s brain.  New Scale’s M3 Smart Stages were uniquely suited to this task.  Read more about M3 Smart Stages technology and the development of the MPM system in Medical Design Technology.

During set up and simulation of experiments, researchers use the MPM System with a steel rod (reference probe) to avoid damaging delicate silicon neural probes.  Once positioning and alignment is established, they remove the steel rod and swap in the neural probes shortly before the experiment begins. New Scale has designed probe holders for Neuropixels, NeuroNexus, Cambridge NeuroTech and others to simplify this task.

But what about positioning of optical fibers for optogenetics?

A number of research labs have arrived at simple and elegant solutions for positioning optical fibers on the cranium or pia mater using the steel reference probe of the MPM System.

At the Deisseroth Lab, Stanford University, YoungJu Jo attaches a small optical fiber holder to the reference rod. In most experiments, one arm of the MPM System is used for the fiber, and another arm of the MPM System is used to position a Neuropixels probe. In other experiments, as in the photo below, two MPM arms are used for fibers, for bilateral stimulation of a specific cortical region. YoungJu Jo explains that this is quite helpful for stimulating cortical regions, and less likely to break silicon probes than manually positioning the fiber.

New Scale MPM System with two fibers in standard commercial fiber holders (FCM; Thorlabs) – photo courtesy YoungJu Jo, Deisseroth Lab, Stanford University
At the Hong Lab, Carnegie Mellon University, Y. Kate Hong tapes a fiber to the steel reference rod and uses the MPM System to place the fiber over a thinned skull or on the pia mater, so as to not damage the brain for cortical optogenetic experiments. The photo below shows a 200um-diameter bare-tipped fiber. 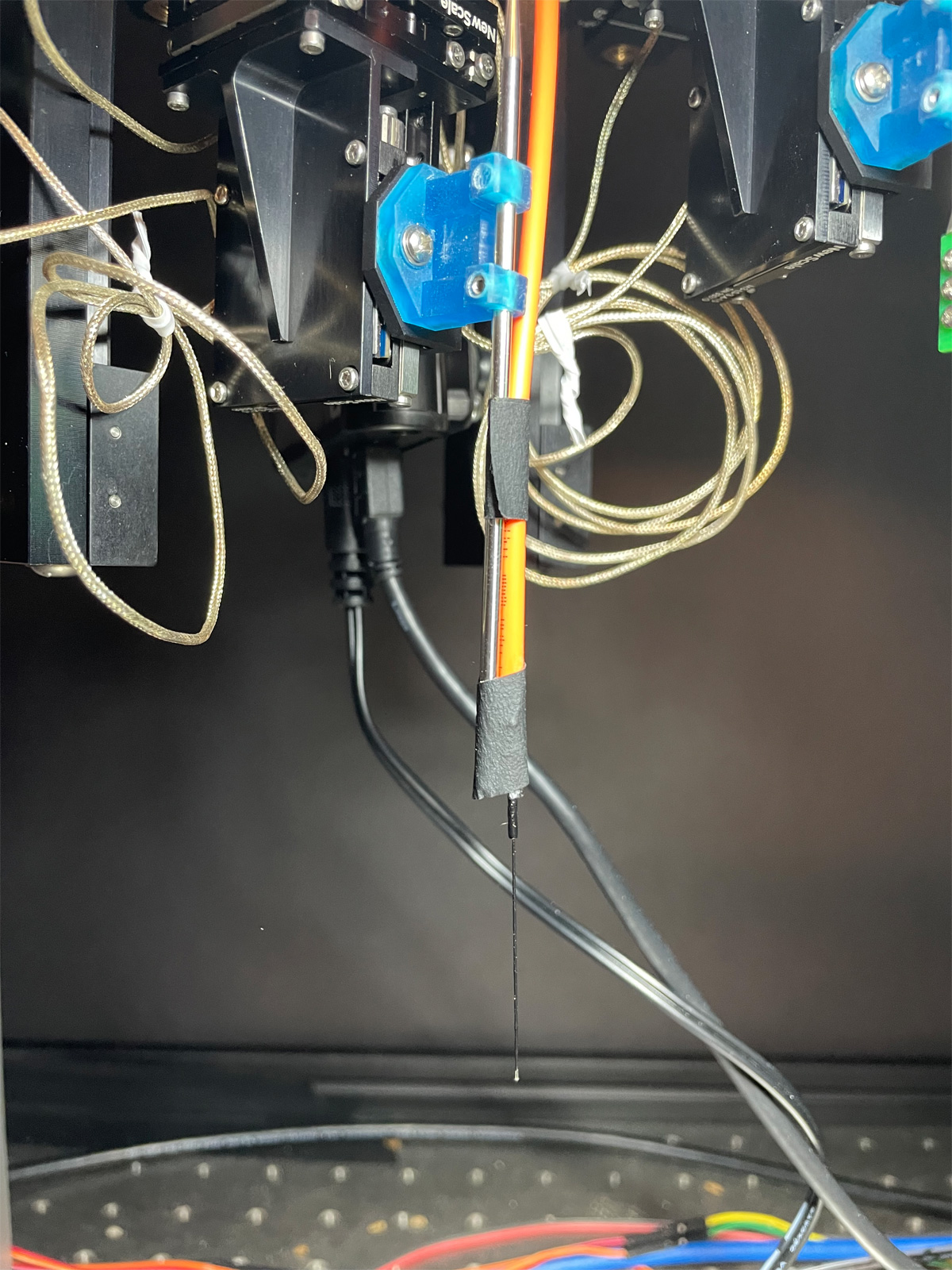 A positioner in the New Scale MPM System with a bare-tipped optical fiber taped to the steel reference probe  – photo courtesy Y. Kate Hong, the Hong Lab, Carnegie Mellon University
At the Allen Institute, Josh Siegle also tapes the optical fiber to the steel reference probe. Five manipulators hold silicon probes for recording signals from the brain, and the sixth holds an optic fiber for optical stimulation of the neurons in the recorded tissue.

For stimulating deeper brain regions, researchers have typically used an implanted fiber with a connector. In this case there is no need to use a manipulator for the fiber.

However, one recent approach is to stimulate in a trans-cranial manner using highly potent red-shifted opsins — stimulating deep brain regions with optical fibers outside the brain, while recording with silicon probes. This is demonstrated in the paper Deep Brain Optogenetics Without Intracranial Surgery. YoungJu Jo has performed a similar experiment (not yet published) with the MPM System.

For a detailed explanation of the science and promise of optogenetics, read the extended article about optogenetics by Karl Deisseroth in Scientific American.

The MPM System is unique in its ability to precisely position multiple silicon probes and optical fibers for optogenetics research. Learn more about the MPM Multi-Probe Micromanipulator System.