The integration of the MPM Multi-Probe Micromanipulator System’s Pathfinder Software with trajectory planning and data acquisition apps with will allow you to simulate, plan, execute, debug and repeat your experiments with greater ease and accuracy. Here’s a sneak preview from Neuroscience 2022 Nov. 12-16 in San Diego, CA.

The MPM System allows you to automate and precisely place multiple silicon probes into one animal for acute in-vivo recording. Using our Pathfinder Software with Virtual Coordinate System (VCS), all probes move in a common stereotactic coordinate space. This can be done either in real time, or in simulation mode as you plan an experiment.

[0:26] As our key customers and mentors began to use the MPM hardware and VCS software, we began to receive questions about how they can better plan the trajectories of their silicon probes to target regions of the brain that they wish to explore. Key questions would come up, like:

“I know the region of the brain I want to explore, but how do I get there? And how will I know when I’m there?”

This was the impetus behind the project, which we expect to deploy for beta testing in early 2023.

Trajectory planning tools, such as Trajectory Explorer (Peters Lab, University of Oxford) and Pinpoint (Virtual Brain Lab), will allow the probe location to be available in a 3D brain model, visualizing the probe as insertions progress.

Data acquisition apps, such as the Open Ephys GUI (open-ephys.org), SpikeGLX (Janelia.org), and Allego (NeuroNexus.com), will display the brain region and channel depth of each electrode on the real-time traces.

This integration allows you to simulate, plan, execute, debug and repeat your experiments with greater ease and accuracy.

Simulating an experiment helps you pre-determine all of your hardware settings, so you are not wasting time in the lab, arranging and then rearranging the hardware. This simulation becomes even more valuable as you work with trajectory planning tools, allowing you to determine the probe’s insertion path, with the start and stop coordinates required for the probe’s trajectory to hit a target brain region.

For example, a researcher knew where he wanted to start and stop recording. But you can’t just go to that internal place in the brain, other than in a simulation. When we set up that trajectory in simulation, then did a negative insertion, it let us find a place outside the brain that would be a safe start point for the insertion.

You can do this for multiple probes, simultaneously, and allow you to plan an entire insertion path right from your PC.

Once those Pathfinder (VCS) inputs have been calculated and updated, you must establish the appropriate stereotactic coordinates for the experiment. This is done by calibrating each animal by registering bregma and lambda using the MPM alignment probe, as shown in this example (courtesy of Ahmet Arac at UCLA).

This calibration will likely show minor differences from the simulation, which may require minor tweaking of the physical setup. If you do an experiment with this animal again in the future, calibration will need to be completed at the start of each experiment, since the head may not be fixated in exactly the same spot each time.

In this example insertion, you can see the calibrated probe position in the Pathfinder (VCS) software on the left, and an image of the probe on the right.

After the successful calibration of your probe, it will display in Pathfinder’s 3D virtual coordinate system and Pathfinder will begin to pass the probe coordinates to your trajectory planning and data acquisition apps. This allows you to visualize each insertion in real time within the trajectory planning app, while letting you see the brain region and channel depth in the data acquisition app, helping you determine if you are in the right spot.

Using the Trajectory Explorer, for example, a new window will open alongside the Pathfinder (VCS) software. The new window shows the progress of the probe through the Allen Institute’s 3-D brain atlas, the Common Coordinate Framework (CCF).

With the Trajectory Explorer app, the probe location in the CCF brain model will be visible as insertions progress.

This will resolve many key issues for researchers during experiments. For example, if you had to move a planned probe start position to avoid a blood vessel, this will help you know if you are still on target.

Integrations with data acquisition tools, as shown in this image from the Open Ephys GUI, will allow you to compare real-time acquisition data to each probe’s position, based on your MPM coordinates. Live heat maps allow you to visualize brain activity, making it much easier to understand which neurons are firing at each point in time.

This will again resolve key issues during experiments. For example, if you are seeing different types of activity (e.g. spike amplitude, spike rate) in a particular region than you expected, this will help you identify if you missed your target.

Or, with a 4-shank probe with 384 recording channels, you can better identify which subset you should monitor at a given time.

This positional feedback will allow you to make better, faster decisions during experiments and resolve many questions that have traditionally been quite challenging to answer in the middle of a recording. 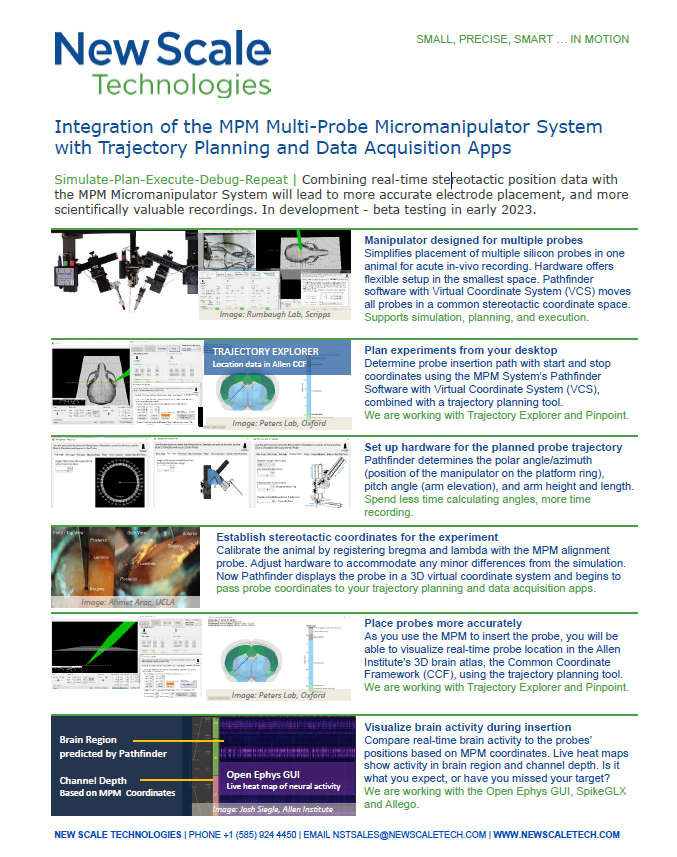